A Blood in the Alley Production

Mingey loves her cats, loves club milks and loves Himself. She hates under the stairs, crow haired welfare officers, black dogs and the “snouts” who torment her.

Writer John Murphy creates the strange, darkly humorous world of  Mingey – a fascinating character whose language is quirky and childlike, whose passions are extreme and whose story is emotionally riveting.

“I told him, ‘there’s plenty more fish in the sea’. But he knew and I knew that that was a pile of useless shite cos fish are slippery and hard to keep a hold of.”

“He lets me take a pull of his fag me thinkin’ I’m the right lady til I puffs a pull and I’m coughing my guts out from the shite taste and the burning tongue. I’m thinking I don’t want to be no smokin’ moviestar don’t have the looks anyways I’m like the back of a van I feels like telling him to stick them smokes up his hole I’ll get you back for trying to poison me but he’s laughing again no teeth showing he’s shining and bright and the smoke thoughts run out of my head.”

Appearances with the Abbey Theatre include The Great Hunger, The Gentle Island, The Mai and Yerma. With Druid, Joan has appeared in Carthaginians, The Playboy of the Western World, Conversations on a Homecoming and The Spirit of Annie Ross. Productions with Island Theatre Co include Faith Healer, Pigtown, Where He Lies, Lovers and Less Than a Year. Joan directed Buck Jones and the Body Snatchers (Georgian House, Limerick and Dublin Theatre Festival) – nominated for best production at the Irish Times Theatre Awards. She has also directed Anything But Love and Excess Baggage (Belltable Arts Centre)

Film and TV work includes, Escape for Virgie, Ros na Run, The Strangers, The Run of the Country, Happy Birthday to Me, The Closer You Get, Marion agus an Bhanprionsa, Trivia, Kilnascully and Mattie.

Smallone has been performed at: 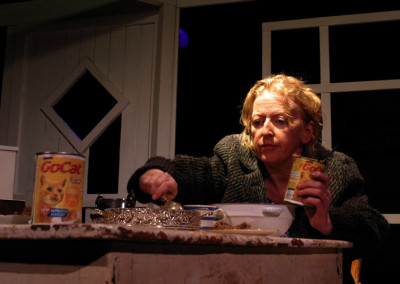